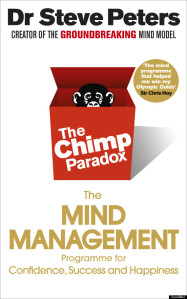 I enjoy taking models from Eastern and Western ways of viewing the world, comparing them, contrasting them and working out how they can be integrated. I’ve long been a seeker, and I relish the challenge: looking at two supposedly distinct systems and seeing how they provide a combined (superior?) wisdom. Certainly as I deepen my understanding of mindfulness, meditation and the Buddhist teachings, and continue my practice in Western therapeutic approaches I actually see more overlap than distinction.

So, it was with much enthusiasm I greeted the decision that a book club I participate in took up the reading of Steve Peters’ “The Chimp Paradox”. Nothing unusual about that you may think – the twist being that the book group is made up of fellow Buddhists.

The Chimp Model developed by Peters came to the public’s attention after his success using it with a host Olympians especially the British Cycling team at the Beijing Games in 2008. The model explains how the mind can be seen as three systems. The Human, mainly based in the frontal lobe, is a logical thinker and works with facts and truth. The Chimp, mainly based in the limbic system, is the emotional being and responsible for feelings and impressions. It often acts without the permission of the Human. In fact, the model considers the Human and the Chimp to be two separate thinking machines. Each will take an independent view and interpretation of our experiences. Both have the ability to input information into the third system, that of the Computer. This is a storage area for programmed thoughts and behaviours. Peters explains that the key (to a well-managed life) is to store helpful information on the Computer.

When under stress, there is a risk of a ‘Chimp hijack’. The Chimp is a quick reactor – a very useful thing when you consider our evolutionary path: go back to the days of the sabre toothed-tiger and we needed a system with no delay – by the time we rationalised an escape plan, we would have been the tiger’s dinner! But we can probably see that in our lives today, it is rare we need such an extreme Flight, Fight or Freeze system. Stress, anxiety and other common conditions in the Western world can be viewed as when our inner Chimp is in overdrive. Peters advocates that when we feel this hijack, we need to recognise it, slow down, get some perspective and develop a plan from the Human mode.

When I read Peters’ suggestion the first thing that comes to mind is how mindfulness meditation is exactly that process. We sit, place our attention on an anchor (such as the breath), note our mental activity as ‘just thinking’ and that process opens up a distance from our thinking, a useful distance in which we can adjust reactions towards responses. 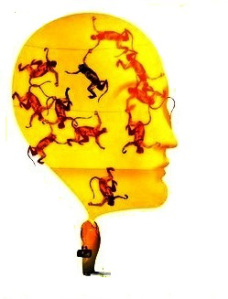 Buddhism too likens the inner workings of our mind to that of a primate – in this case, ‘monkey mind’. Chogyam Trungpa Rinpoche remarks “The mind is like a crazy monkey which leaps about and never stays in one place. It is completely restless and constantly paranoid about its surroundings”. So here we see the commonality – a tendency of hyper-vigilance, looking out for threats that need reacting to. This chaotic state of mind can be trained by meditation. But where does Buddhism see its root? Rather than simply an evolutionary hangover related to getting our Chimp-like needs met, the Eastern teachings describe monkey-mind as a consequence of ego. Ego, in the Buddhist sense, is quite different from the Freudian ego (the organized part of the personality structure). In contrast, the Buddhist ego is a collection of mental events that does its best to solidify a ‘self’ that is separate and needs defending. The ego lives through comparison. The Shambhala Buddhist teachings speak of this ego as a kind of insulating cocoon which is highly personal and idiosyncratic. This cocoon, spun by defending thoughts and fear-directed activity that become habitual, is described as unpleasantly constricted and yet comfortable. Maybe you have noticed how habits, often un-wanted, are hard to shake because they are familiar?

Battle of the Apes

There are some immediately obvious contrasts between Peters’ model and that of the Buddhist Dharma. Firstly, Peters’ sees the Chimp and Human as completely independent and separate. The Buddhist view on the development of Ego (if we allow ourselves to parallel it with the Chimp) is one of layers built around the ‘core’ of our being. Rather than side-by-side therefore, ego encapsulates a ‘naturally awake’ state. Peters emphasises “To reiterate, the Chimp within your head is a separate entity to you. It was born when you were born but actually has nothing to do with you as a Human. It is simply part of your machinery”. This is inconsistent with the Buddhist view. Our ego is NOT born at the same time as our essential or primordial essence – it is created in reaction, out of a defence. At this point it is interesting to bring in how Buddhists responsibility and the consequences of our actions. Karma is often used in contemporary language, but often in a confused way. At worst, people see it as ‘you get what you deserve’, yet actually it simply says that there are causes and conditions that lead to the situation in the present moment. We don’t need to believe in re-incarnation to reflect upon karma – it is totally relevant to THIS lifetime. We can perhaps see that our childhood, our upbringing, and the early influences in life have laid down our views on the world and therefore influence our actions. Over time, these actions can become habitual patterns which create the Ego. This differs considerably to how Peters talks of the nature of the Chimp – as independent (Buddhists could contest this given the central teaching on all things being inter-dependent) and exhibiting behaviour we are not responsible for. According to karma, we are responsible (NB this is not the same as ‘to blame’) for feeding our Ego, feeding the Chimp.

It is not only the nature and development of the Chimp / Ego that differs across these models. There is also divergence, on some level, in how we are encouraged to work with them. Peters came to the public eye because of his work with athletes: by working on the Chimp, he was helping the person under the bonnet of the athlete so to speak – but ultimately, this was with the aim of enhancing performance. Indeed, the latter parts of the book give some (very useful) ways to work with the Chimp yet, there is a sense that there is somewhere to get. Contrast this with the Buddhist message that it is a “journey without goal”. This is something that confuses people new to meditation, especially now given the mindfulness revolution and people taking up meditation in order to release stress and anxiety. Buddhism and meditation is not about ‘self-help’ or self betterment – rather, it is about seeing things as they are. To uncover the naturally awake state that is always there for us – to discover, not to change or create. We are not looking to manage an Inner Chimp, we are simply to see through our Egoic actions as unnecessary and let them go. Peters’ intent is to help us control the Chimp. And indeed, many Buddhists ‘settle’ for the turning down of the heat, reducing the heat of reactivity from boiling to a light simmer! Yet the ultimate aim (if we dare believe it) is total liberation, total freedom from Ego.

It is fair to say though that given the distance in blood line (Buddhism being 2600 years old and Peters’ book being published in 200?) there is incredible similarity and complementarity. Both models underline that this is not a case of good vs bad. The Chimp is not evil, the Ego is not to be broken down in a destructive way – indeed, to kick down the cocoon risks hurt. We need to see the Chimp and monkey-mind activity as just confused states, just doing their best to get needs met.

Another aspect is how the activity of the Chimp / Ego leads to unwanted thoughts and feelings that can cause us to act impulsively. The phrase Peters uses to describe this is ‘Chimp hijack’. It reminds me of the expression often used by neuroscientist Rick Hanson ‘klesha attack’. The kleshas are the most poisonous or deepest roots of our emotional reactivity – hatred (or anger), greed (or attachment) and delusion (or ignorance). Whether an attack or a hijack, these emotions can completely derail us, ruin relationships and lead to much guilt.

One final point is best spoken to by another quote from Peters: “My model is one way [of dealing with stress] but there are many other models out there; search out a model or a technique that you can relate to and use that”. I am sure he must be a Buddhist*, as this speaks directly to the Buddha’s assertion to “test the teachings in the light of your own experience” – and if they don’t match up, ditch them!

“I just want to help people,” Peters explains. “My biggest satisfaction is getting a better quality of life, where you’ve seen that suffering and been able to remove that suffering, whether that’s in sport or their personal lives.” The Buddha said ““I teach only two things: suffering and the end of suffering.” What both systems describe is, whilst there is inevitable pain in our everyday lives (losing a job, losing a loved one, experiencing a decline in health etc), the suffering around these events is optional. For Peters, he recommends a training of the Inner Chimp; Buddhism invites us to see how our thoughts (and consequences of those thoughts) are often the root.

I enjoyed Peters’ book, and think there is a lot to gain from the strategies he gives to help in the training of the Inner Chimp. However, the mind-management he offers falls short for me. I am sure in his 1-2-1 work with psychiatric patients and sports people there is a more individualised approach, but for me, the book represented a cognitive / behavioural approach to psychological function and emotional well-being. As a Humanistic Therapist I enjoy working from a perspective that each person I see is unique, and that there are no uniform models of an individual’s mind with no set of associated techniques to be applied. 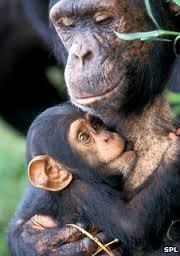 Buddhism and Humanistic approaches to therapy involve a counter-intuitive turning-toward, not away from the distress. Cognitive and Behavioural strategies have been criticised for applying a plaster over the wound – in the short term, it gets us back up and running, and maybe better able to cope. But long lasting healing requires us to uncover the wound, maybe even pick off the scab so that it can heal with a lesser scar. The practice of meditation allows us to bare witness to our thoughts, our suffering; the practice of therapy allows someone else to provide that presence. My supervisor recently described this ‘sitting alongside’ the client as ‘Guerrilla warfare’ – sitting with rather than pushing away pain can be regarded as somewhat irregular tactics!

Peters quite rightly says our Inner Chimp has needs and these need to be met – can we take this a step further (enabled through both Humanistic Therapy and Buddhism) in understanding where these needs come from, what do the defences of our Ego protect us from?

I’d love to hear your thoughts.

* in this life, or a previous one…Buddhist joke 🙂