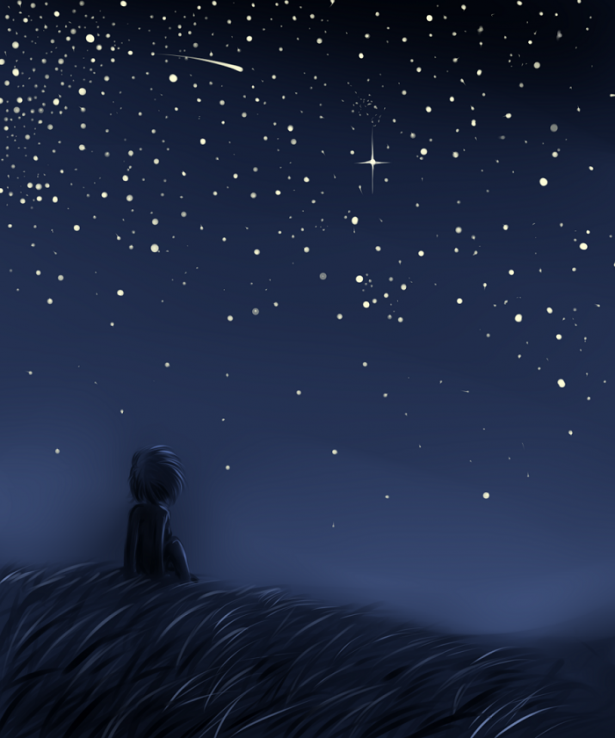 Last week, I used Portia Nelson’s poem “Autobiography in 5 chapters” to illustrate the therapeutic journey. What I didn’t share was my personal interaction with that piece. I went to a coaching conference in London (I think it was in 2008) and one of the speakers read out the poem – it touched me, it opened something up in me. And, just a couple of months later, I started working with the reader of that poem: a psychotherapist from the psychosynthesis tradition.

At the weekend, I was listening to an interview with Claudio Naranjo – a man who is becoming a big influence in my personal, professional and spiritual lives – and he used an expression from Gregory Bateson: that all our thoughts and reflections come from, with, and through stories. I shared last week’s poem because of its impact on me, the story behind my meeting the poem is why I hold the poem so dear. That therapist encouraged me toward the transpersonal path – and that path became meditation and then Buddhism. If I hadn’t heard the poem, if I hadn’t been so inspired, where would I be now?

And so it is this week that I want to share a few more personal stories with you. Short stories that we might also refer to as phrases, or sayings. These phrases have led to “a-ha” moments – what Fritz Perls would call “the shock of recognition”; moments where we ‘get’ something on a whole body level, something clicks in to place and we feel irreversibly changed. I will relay them to you in what I remember as chronological order, but that is by no means sure – as memory has a way of changing and adapting to what is convenient now.

“Strive for excellence, not perfection”

I believe this quote comes from H. Jackson Brown, author of “Life’s Little Instruction Book”, but I didn’t know that in 2004 when I was first exposed to this idea. A coach, later to become a dear friend and influence on my life, shared this with me. Julia was the first person to recognise and point out what I would later come to know as my “Be perfect” driver: a driver that has been my long time default (and still shows up in times of stress). I have been a life-long enthusiast in many domains – from (as Julia would softly tease me) “knowing all the stars in the sky” as a child, to spending hours lounging on living room floor reading about cycling when I encountered that new passion aged 28. Yet it has been a double-edged sword. The love of learning, and a confusion that learning would provide an escape – to be the best at anything would make me, Helen okay, a more complete person. I once remember reading a quote from the cyclist Graeme Obree, his “biggest fear isn’t crashing this bike at 85mph and losing my skin – it’s sitting in a chair at 90 and thinking ‘I wish I’d done more”. Obree suffered from crippling depression, and he explained that winning wasn’t something that brought him joy, but rather he had to do in order to be okay.

I take that thirst in to my life as a therapist – yet I have learned to dial the intensity back. My research and endeavour is now looser, less tyrannical. I am driven by mastery, a wish to know my trade – and I get such great joy in having a spare hour to open up a book and stretch my mind.

“When touched with a feeling of pain, the uninstructed person sorrows, grieves, & laments, beats his breast, becomes distraught. Just as if they were to shoot a man with an arrow and, right afterward, were to shoot him with another one, so that he would feel the pains of two arrows; physical & mental.”

This story from the the Buddhist sutras has the buddha explaining the difference between pain and suffering. The existentialists understood this: there are certain “givens” of human existence, and it is how we respond that dictates the quality of our life. This often becomes the centre of my work with clients – life will throw up all sorts of challenges: death of a loved one, a breakdown of a marriage, the loss of a job. These are all pains – or the first arrow. If we resist the pain in some way: by wanting things to be different, wanting these things to have not happened, we run the risk of ramping up the difficulties: the second arrow. Essentially, the Buddha’s words have taught me this handy equation.

And, this has become my main practice of late: to feel the contraction when pain arises, and rather than tighten, trying to remain open to the pain rather than resist it, make it wrong, get rid of it. To drop the story line as Buddhist teacher Pema Chodron would invite: to feel my vulnerability without adding a layer of commentary “this shouldn’t be happening” or pointing the blame elsewhere “who did this to me?” – and remain open to the pain as an energy that arises and WILL pass if I rest with it directly.

“For every finger pointing, three are pointing back”

This phrase has been attributed to many sages: from the Navajo people, Jesus and the Buddha. The sentiment is also detailed in western psychotherapeutic theory – the very thing we accuse others of is to (some extent) the very thing we dislike in ourselves. In its most exaggerated form it is the root of “projective identification” (where parts of self cannot be tolerated and instead get forced on to the other person for them to feel). I first came across the teaching during my Buddhist study, and its been a powerful reminder to focus on my reactions to an inflamed situation – to notice when I am looking to blame others and to explore two questions: firstly “how am I contributing to this situation?”, and then “what feelings am I not willing to feel?”

“The bad news is you’re falling through the air, nothing to hang on to, no parachute. The good news is there’s no ground.” 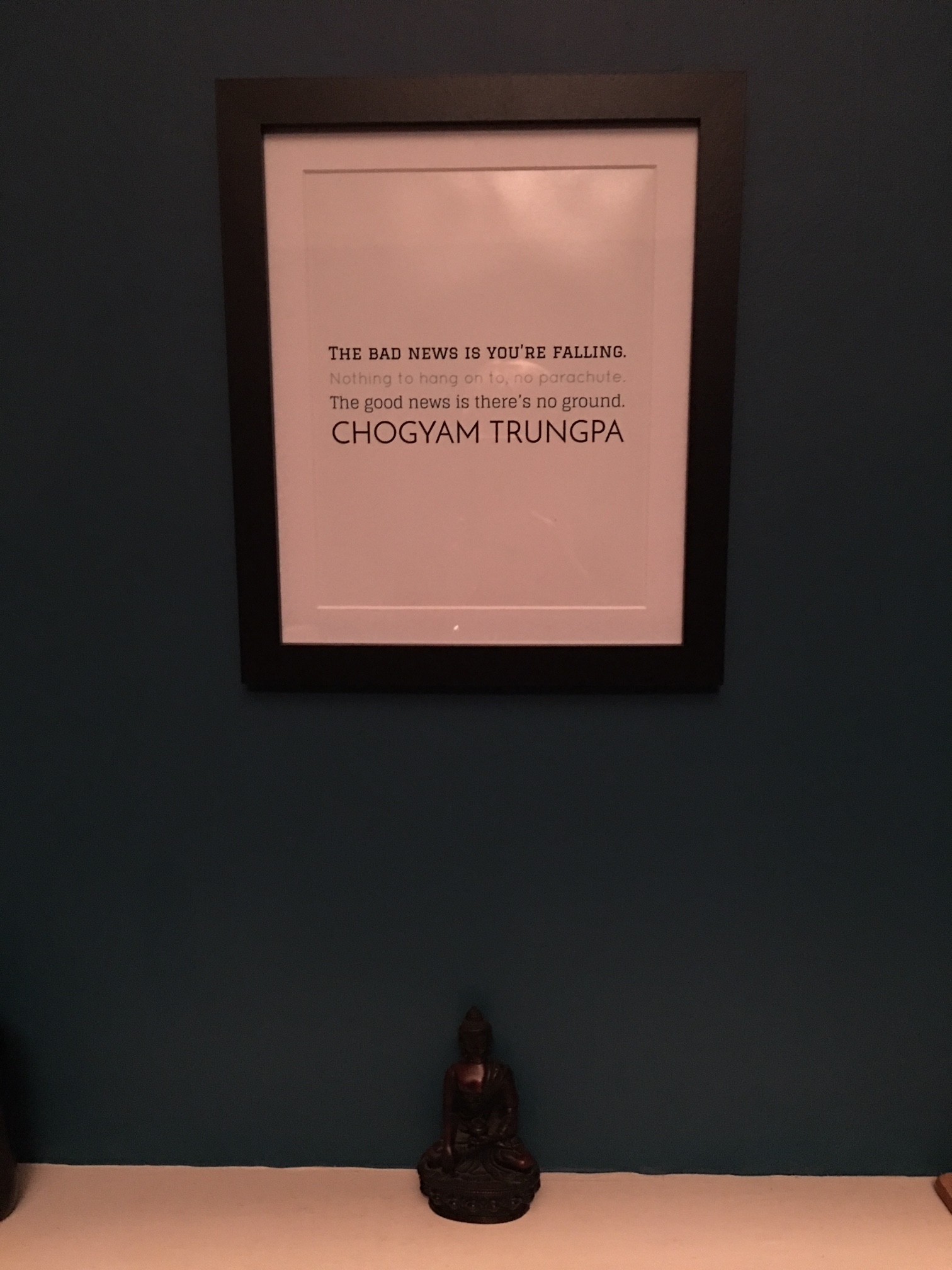 Chogyam Trungpa was the founder of the Shambhala buddhist lineage, the one I practice in. I hold many of his teachings dear to me, yet this particular quote is one I try to hold forefront in my mind (and hangs in my bedroom as a reminder). I have, and still do, suffer from anxiety. Before finding the Buddhist path, I was driven (out of my awareness) by this anxiety – the need to be perfect, the need to micro-manage everything (and often everyone!) in my life in order to feel some ‘okayness’. The quote reminds me that actually, I cannot control anything. To be human is to live with uncertainty: and rather than “plot and scheme” to rid the uncertainty, the practice is to open to the uncertainty and “dance” with life. I, and everything around me, is falling – but hey its okay, there isn’t some crashing thud hanging over my head. Some people may not find that too reassuring, but believe me, there isn’t any other alternative. It might not get rid of my anxiety, but it makes my anxiety workable: not a friend, but a companion. One who whispers to me that life is precious, and to make good use of it.

“The wound is the place where the light enters you”

I spent much of my life trying to “be perfect”, trying to not only “be strong” but to look infallible too. My strength and “being a rock” for others is how I created relationship – I was the reliable friend, the helper. These words from Rumi have therefore been a revelation to me. It was reading Brene Brown’s work that not only helped me to accept my vulnerability but inspired me to live from it.

The deal clincher was spending 2012 travelling back and forth to the US to complete my meditation teacher training. The sangha at the Interdependence Project showed me how to be open about my wounds; and the course programme helped me teach from that place rather than from a detached, expert position. This was the door to becoming a therapist: how right Jung was to talk of the wounded healer! Being vulnerable with my clients helps us make contact, deeper contact. For them to know that I struggle in life too can bring them great relief, and it equalises us in the room. I’m bound to write more about self-disclosure in this blog at some point in the future, but for now I will share this is of course a balance – for many clients, sharing my fragility as a human might be too much to assimilate. After all, is it safe to wobble if the therapist has a tendency to wobble too? I share my struggles only in the service of the client, when it might help knowing they are in relationship with a fellow pilgrim.

The Buddha talks of suffering in The Four Noble Truths; in fact he makes suffering a path. Turning toward and understaning suffering is often not what a client has in mind when they come to therapy, more often than not they want rid of it! And who can blame them? However, gradually building curiosity about the nature of suffering, the nature of the wound leads to powerful growth.

What have been life-changing expressions in your life?