I was fortunate to have spent last week working at the Mother and Baby Unit at Bethlem Royal Hospital. The hospital, founded in 1247, is the oldest institution for the care and treatment of mental illness. It’s nickname “bedlam” is often used to describe ‘uproar and confusion’ – but I can assure you its 270 acre grounds on the Kent / Surrey border are nothing but serene and peaceful! The ‘MBU’ specialise in the treatment of perinatal illnesses. The women admitted have either developed a mental illness or have had a relapse of a serious mental illness during pregnancy; or women who have developed depression and / or psychosis, or have had a relapse of serious mental illness following the birth of their baby.

Prior to my trip, I had been quite anxious – not knowing what I would see and experience. In preparation, I had watched the award winning Channel 4 documentary series “Bedlam” and this tuned me in to the severity of the conditions treated at the hospital. My private practice work does bring me in to contact with people who have been through breakdowns and some may still be on anti-psychotic medication. The week at the MBU however allowed me to be with people still in psychosis, and to become more familiar with the wide range of treatments: from medication, one-to-one psychological interventions and occupational therapy.

During my time on the MBU, I was working with Dr Trudi Seneviratne – the consultant psychiatrist leading the perinatal service. Dr Seneviratne has published extensively on perinatal mental health and the treatment of psychosis. Working with her and her team this week has helped me understand the wide-ranging effects of pregnancy and childbirth on women’s mental health, and the differences between three broad categories:

What struck me during my week on the Unit was how psychosis can hit women with no prior psychiatric history. Whilst sufferers of conditions such as bipolar are more likely to go on and develop PP, unlike other chronic mental illness, patients with PP are often those who have been high functioning women before childbirth. In speaking with several of the nursing team on the MBU at Bethlem, it is not uncommon for their patients to be career high flyers coming from professions such as medicine, law and teaching. One can imagine that the perfectionism and structure that enhanced their careers have been the very things contributing to their psychological downfall – high expectations in parenting and the lack of control over an infant perhaps triggering the break. Presence of PP is also escalated due to factors such as a traumatic labour, sleep deprivation, relational strain and the hugely fluctuating hormone profiles. Not surprisingly, it also seems to have a hereditary link – but one might argue that could be a nature AND nurture issue given that values and beliefs are handed down alongside a gene pool!

I was hugely impressed with the care of both mother and baby at the Unit. Having done a fair amount of reading about psychiatry recently, I had become aware of criticisms levelled at the profession concerning over reliance on medication and a bias towards the biomedical model. The team seem very tuned in to the ideas often accredited to the ‘Critical Psychiatry’ movement that advocates a patient-centric model for treatment and recovery. More than once in the week did I hear a staff member remind the patient “you tell us, you’re in charge here” in a way that empowered.

Each patient has a care plan, reviewed weekly at the ‘Ward round’. At these meetings, the patient (with their partner if they are available) gets a chance to sit with the whole team: the consultant psychiatrist, the Senior Health Officer, the Staff Nurse, the nursery nurse, the Occupational Therapist, the Clinical Psychologist, a member of the social care team, and the health visitor (if the patient is approaching discharge). I imagine these meetings can be awfully intimidating for the patient when they are first admitted to the Unit, but the team engage in the process in a really warm and empathic manner. It was obvious to me how much they care for the patient, their partner and their child – and how often they go out of their way to ensure consistent care 24/7. All the patient’s concerns are heard and respected no matter the stage of recovery the patient is in: again I was impressed with how patient and warm the staff were in the face of quite disturbing psychotic behaviour (whether delusions, hallucinations or extreme emotional outbursts). With 13 patients on the Unit at any one time, the Ward rounds are intense days – ones that left me exhausted, physically and emotionally. I have much admiration for these professionals who repeat this process week in, week out. 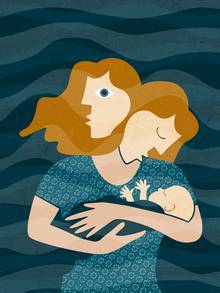 As Winncott once said, “there is no such thing as a baby”, and it is apparent that the priority for the team is themother-child in relationship to one another. Recovery of the mother is the goal, as it allows for the proper care of the child and their subsequent healthy development. Given the importance of the first 2 years of life, it is imperative that the mother-child attachment patterns are safe-guarded…or there will be more work for therapists like me in the years to come! Given the range of professional expertise on hand, recovery is guided using holistic principles all aimed at re-integration in to the real world and family life. For example, a developmental psychologist is on hand to help the parents understand their interactions with the child. Having recently been exposed to Family Therapy principles, I was excited to see the facilities the Unit has in place, including a two-way mirror for observing the parent-child interactions and video / playback that help the psychologist ‘coach’ the parent skills which aid healthy attachment.

The mothers often arrive on the Unit in a very poorly state. Yet even in the most severe cases, the average time to discharge is between 8 and 12 weeks. Many of the staff shared with me how miraculous the turnaround can be, and how incredible it can be to watch the transformation and see these once ‘crippled’ people ‘fly’ to full health. One of the vital steps in this process is how the patients are eased back in to normal life with a progressive programme of ‘leave’: starting with day visits back home, maybe moving to weekends at home and finally full-week stays. Even after the patients are discharged, the team and Unit’s services are still accessible. For example, the clinical psychologist team may continue 1-2-1 work with the mothers (and indeed their partners) for considerable time post-discharge. In fact, it might be that the mothers are only able to start processing what has happened after they leave the Unit. Dr Seneviratne often emphasised how the mother needs to be sufficiently recovered and stable before they have enough psychological space for deeper exploration.

It is hard to say I ‘enjoyed’ my week – at times I felt overwhelmed by it all: I was aware of how exhausted I felt (undoubtedly some real fatigue, but also the emotional cost of the work AND an element of good old ‘counter-transference’, where a therapist picks up some of the patient’s ’emotional charge’). In fact, I think it will only be weeks later that I am able to assimilate everything. Overall, I believe this has been a great experience for me. I’ve learnt a lot about the triggering issues for psychosis, the medication and doses used, how paramount the link between physical and mental health is held (especially the vital nature of sleep and rest). I would also add that I am greatly encouraged by the approach of modern-day psychiatry and it has to be said, by how well the NHS supports this process.

I guess two of the major aspects “TTA”* were: firstly how brave these women are in facing this ordeal. It must be incredibly scary being uprooted from home** when expecting or shortly after giving birth. And secondly, just being in the presence of these women and how abruptly their functioning is affected was in some ways, scary for me. My fear wasn’t of them, but rather an appreciation of how fragile our human existence is: mind and body. Part of that has been a personal processing of my own way-of-being, for example how I can “push on” despite a lack of sleep. A good reminder that to care for others requires care for self.

If you want more information on mental health pre and post child birth, information can be found on the NHS website, and on the South London and Maudsley Trust website.

* Patients going on home leave need their medication ‘to take away’ I learnt a LOT of acronyms this week! I felt guilty stopping the team mid-flow to ask “what does that mean?” (I imagine this is why the Unit don’t take on too many placement visitors, and why I feel so fortunate to have had this opportunity).

** As there are only 17 of these specialist units around the country, many women travel miles from home to access a centre.